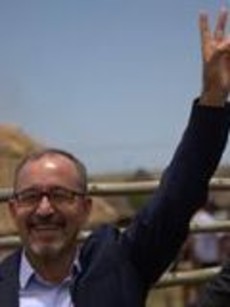 Lawyer Arif Ali Cangi received The Nuclear free Future Award of 2016. Being a board member of the Lawyers' Association Cagdas Hukukcular Dernegi, I dealt with issues of human rights, torture and women's children's and prisoner's rights. For the past twenty years I also engaged in resistance against health and environmental hazards. I fought against environmental devastation of their region caused by gold mining. For my efforts, I was physically attacked by enraged miners. The mayor of Dikili/Izmir hired me to fight for free access to the public water supply. I reported about illegal deposits of nuclear waste near Gaziemir/Izmir. I represented the potential victims against the company and the public institutions responsible for the contamination. As early as 2007, the Turkish Agency for Nuclear Energy had discovered nuclear waste on the site of a former lead factory, but it did nothing to protect the people living nearby. Together with the environmental protection organization EGECEP, I brought the issue to the public’s attention. As lawyer for EGECEP, the Green Party and the Left Future Party I brought legal action against those responsible. Recently, I became a member of the environmental committee of the Central Association of Turkish Lawyers. I act as legal counsel in three lawsuits against the construction of the Akkuyu nuclear power plant.