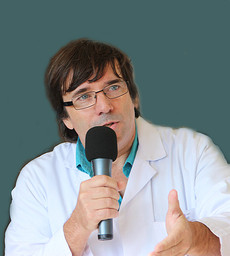 Director of the CRIIRAD laboratory

Bruno CHAREYRON is a French Engineer in energetic and nuclear physics with a Master in Particle Physics (1987). Since 1993 he is the director of the CRIIRAD laboratory. (Commission for Independent Research and Information about RADiation) is a French Non Governmental Organisation created in 1986, by French citizens being surprised by the dishonesty of the French Government about the actual contamination of the French territory by iodine 131 and caesium 137 coming from Chernobyl. In order to make independent measurements CRIIRAD created its own private Laboratory. CRIIRAD mission is to make independent radiation monitoring in the environment and use this data to improve people understanding of the issues of radiation contamination and to improve people protection against radiation. Since 1993 Bruno Chareyron has been particularly active for raising awareness about the impact of uranium mining on health and the environment. He conducted studies about the impact of uranium mines in Europe, Africa and Brazil. He has been involved also in supporting initiatives of citizens in Japan for the independent monitoring of the contamination of the environment after the Fukushima nuclear accident in March 2011. In 2016, Bruno Chareyron received the Nuclear-Free Future Award, category “Education” for “his unwavering commitment exposing nuclear industry disinformation and heightening public understanding in France and around the world”. Examples of videos : Radiation from a truck transporting uranium (2008, in English) : http://www.youtube.com/watch?v=0eBICCIbsWA&list=UU1IPX1s_Wj63FH2fcNuHbtw&feature=c4-overview Contamination of the Alps by Chernobyl Fallout (2015, in French) : https://www.youtube.com/watch?v=xkbaIhCYqko Monitoring of radiation in a building of Fukushima city (2011, in English) : https://www.youtube.com/watch?v=zLvoQKx9glE Risks induced by natural uranium (2015, in French) : https://www.youtube.com/watch?v=Pxv_ZrlKsNQ