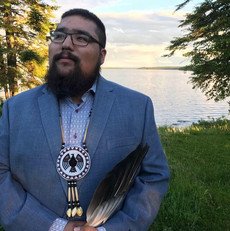 In 2012, I became involved with local Youth Council as a temporary student representative for Voyageur Memorial School. A uranium exploration project was underway and the youth of the community were dissatisfied with the possible environmental and health risks that the project could inflict. The youth wanted their voices heard, but they were afraid to share their concerns with the local Youth Council. It was not until I decided to share my concerns along with my peers to the Youth Council. It took some time before the rest of the community to support the youth in their moment of environmental protection of their ancestral lands. Awareness campaigns was always a continued effort, but the youth decided to go bigger. By doing so, they gained support from other Cree Communities within Eeyou Itschee (People's Land in our cree language). Utilizing modern technology through social media, radio interviews, and verbal awareness amongst our people. The Youth of Mistissini had all of the Cree Nation supporting their cause and eventually, entities and communities from all over Quebec and certain parts of the world supported the protection of the environment. Throughout the next two years, the Quebec Government had finally set a temporary moratorium on uranium projects within the province. Although a temporary victory for the Cree Youth, it was an amazing experience with my peers. In October 2015, I was part of the group of youth who were to receive a Special Recognition for a Nuclear Free Future Award presented by the Nuclear Free Future Award Foundation in Washington, DC, USA. The company then went on to sue the Quebec Provincial government for compensation for their investment. This went on until sometime in 2017 where the corporation lost the lawsuit and have given up the pursuit of the uranium project.