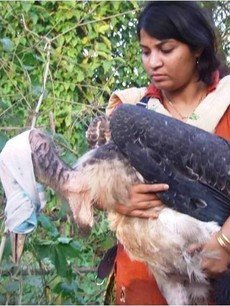 Accredited with "Eath Hero" by Royal bank of Scotland, Purnima Devi Barman, also known as "Hargila baido"/Stork sister among communities and global conservation colleagues, is a wildlife biologist in Aaranyak for last 15 years and a crusader for conservation of highly endangered Greater Adjutant Stork (Leptoptilos dubius). Since last eight years she has been restlessly working in three villages in Kamrup namely Dadara, Pachariya and Singimari where she has been working with communities to protect this endangered bird besides doing her research works. Her passion, commitment and innovative tools to conserve this rare species in non protected area in Assam has resulted into protection of habitat of the species with huge community support in the area. Purnima and her team was able to convince the tree owners for not cutting the trees where Greater Adjutant breeds in the campus of people. The stork feeding on carcasses considered as ugly and dirty as it is a carnivorous bird. The communities once considered them to be untouchable now accepts them as their guests and they have embraced the stork as part of their society. This is just one aspect of the conservation work other than rescue and rehabilitation of baby storks that fell from their nests and her continuing research on biology and ecology of the species.Among some International Awards, Purnima has received future conservationist Award 2009, follow up Award 2011 and CLP leadership Award 2015 from Conservation Leadership program. Purnima has received UNDP India biodiversity Award 2016 from United Nations, Royal Bank of Scotland RBS "Earth Hero Award" under save the species category and Balipara foundation "Green Guru Award" in 2016. She was also honoured with Bharat Sanchar Roll of honour 2017 from BSNL on International Women's Day 2017. Purnima was also honoured with Coolest northeasterner 2014 by thumb print Magazine and has also received FIICI FLO Womens achiver award from north east in 2017. In 2017, she was conferred with Whitley award also known as Green Oscar on 18th May in Royal Geographical Society in London. Her Royal Higness Princess Anne has conferred the award to her. She is a member of global women in Nature Network under which she has presented her work in an International Symposium on empowering women in "Argentina and beyond" held in University of Buenos Aires in Argentina in 2016. She has undergone many National and International trainings including a special training in Greater Adjutant biology study in Prek toal bird Sanctuary in Cambodia and one month conservation management training in Beijing, China in 2009. She has presented her research papers in International Conference of conservation biology in Beijing (2010), Edmonton, Canada (2011), Aukalnd, Newzealand (2012), Montpellier, France (2015), Thailand, USA etc. Purnima is a Gold certificate winer in "Green teacher Environment Education" course under Center for Environment Education, CEE, Ahmadabad. She is also a member of IUCN Stork Ibis and Spoonbill Specilist group. Purnima is leading a self help group called "hargila Army" (protector for the greater adjutant) among 200 women for Hargila conservation. Women plays a vital role in conservation of endangered species, flora and fauna and we need to empower lots of women to achieve this goal. Purnima takes regular biodiversity classes in the village school and tree owners specially to empower them with education. she has been empowering community women with livelihoods, capacity building and conservation classes.