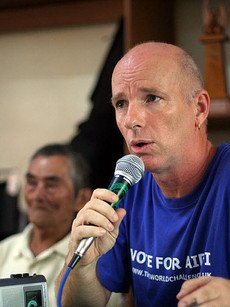 I am a Dutch and studied Marine Engineering. After two years on the seas in which I saw lots of poverty I decided to dedicate myself to the poor. For several reasons it became the Philippines and I prepared myself through an Appropriate Technology group at a Technical University. In 1985 I started (without any support) working in a socio-economic program of a Philippine labor union for sugar workers. I experienced myself the extreme poverty. From farm lots the union ended up with assisting complete plantations taken over through the land reform program. The missing link was technologies. With three colleagues I founded AIDFI where besides community work we started to develop technologies for basic needs. Over the years we designed, manufactured and installed some 15 technologies on water (drinking and irrigation), latrines, renewable energy (biogas, hydro power and wind energy) and agro processing. The idea was local manufacturing for employment creation, environmental reasons and local maintenance. It just so happen that a lot of interest went to the amazing hydraulic ram pump technology of pumping up water to high elevations without electricity or fuel (just the power of free flowing water). The ram model we developed was a crossbreed of expensive imported and inferior DIY models. We took the best of both, simplified the technology and used easily available spare parts (door hinge). The model was a result of continuous research and observations from installations in the field. The installations started spreading all over upland villages in the Philippines and as of now we have done some 466 installations benefiting around 230.000 beneficiaries with easy access to water. We offered our model to others and have now done complete technology transfer to Afghanistan, Nepal, Colombia, Mexico and India coming. Besides the technical innovation, AIDFI for sustainability gives equal importance to the social preparation of the community for the ram pump projects.

Manufacturing and installation of water and passion powered ram pump