Freiburg is set to play host to environmental laureates from across the globe: under the patronage of Klaus Töpfer, the European Environment Foundation is organising the first “International Convention of Environmental Laureates”, to be held in Freiburg from 08-11 March 2012.

Sixty figures from more than 27 countires, all winners of prestigious international environmental prizes, amongst of the Right Livelihood Award have announced their intention to participate at the first convention being organised in Freiburg.

The Convention has three key aspects:

The patron of the 1st International Convention of Environmental Laureates will be Prof. Klaus Töpfer, former German Minister for the Environment, Nature Conservation and Nuclear Safety. Prof. Töpfer is also a former Executive Director of the United Nations Environment Programme (UNEP) in Nairobi. In a public evening event five selected laureates formulate their expectations for Rio+20. Monika Griefahn, a founding member of Greenpeace Germany and former Environment Minister of Niedersachsen will introduce into the evening.

The convention will be financed by the European Environment Foundation and through contributions from Freiburg Wirtschaft Touristik & Messe (FWTM). The Lord Mayor of Freiburg, Dieter Salomon, is a member of the Board of Trustees and has supported the project from its initial stages.

Freiburg is one of the birthplaces of the environmental movement, and has made a name for itself in the fields of solar research and solar technology, traffic policy, environmental and climate protection, and urban development. By launching the convention, the founding members and trustees of the foundation wish to strengthen Freiburg’s role as a “Green City” and a pioneer of sustainability. They also aim to provide fresh impetus to sustainability policy in Freiburg and the discussions that surround this. Bringing together international visionaries and pioneers in Freiburg in this way also serves to publicise and develop ecological endeavours across the globe. The international focus of the convention stems from the conviction that all environmental policy must be implemented on an international scale in order to be effective.

The European Environment Foundation was founded in autumn 2011. The aim of the foundation, which is registered under Swiss law, is to promote dialogue in all environmental policy disciplines within the European states, to provide them with stimuli and to spur on exchange within Europe that is constructive, builds trust, fosters communication and inspires research. The foundation is proud to name 13 distinguished figures from the international environmental movement as its trustees. Prof. Eicke R. Weber, Director of the Fraunhofer Institute for Solar Energy Systems, holds the position of Chairman. Founders of the foundation and members of the Foundation Board are Dr. Bernd Dallmann and Dip.-Ing. Rolf Hiller. 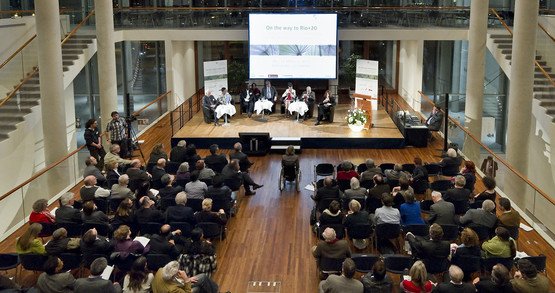