Today, on the anniversary of the Fukushima disaster at the first international environment convention in Freiburg, 63 environmental laureates from 37 countries signed an urgent appeal to the UN sustainability conference in Rio de Janeiro. The laureates will now meet every year in Freiburg to assess progress in these matters and to present concrete examples of change in a bid to drive forward the process of innovation.

Freiburg, 10 March 2012 – The Freiburg Call for Action contains 63 signatures of environmental laureates from all over the world. These laureates came to Freiburg to make a joint declaration at the first environment convention organised by the European Environment Foundation – held during the run up to the UN conference on sustainable development, which is set to take place in June in Rio de Janeiro.

Entitled “Freiburg Call for Action – Declaration on Rio+20 of International Environmental Laureates”, the statement formulated by the 63 environmental laureates calls for the following action in an eight-point resolution:

Under the header “Pioneers of Change”, individuals acting at all levels of politics, industry and society are urged to break new ground in fostering successful innovation. Under “Global Budgets”, the request is for the worldwide distribution of resources and the focus of international programs and agreements to target uniform per capita values for energy, emissions, water, land use and the consumption of resources. The “Green Economy” category states that a market economy is the most flexible and successful type of economic system. However, this requires clear national and international political and legal conditions, such as the introduction of external environmental and health care costs (user-pays principle), in-depth consideration of preventative measures (precautionary principle), eliminating environmentally harmful subsidies, promoting sustainable technologies, limiting the monetary economy to its traditional role, prohibiting speculation on raw materials and stock markets and introducing a Tobin tax on financial transactions.

In terms of “Global Food Security”, the authors call for the modernisation of subsistence farming – which primarily serves to provide food for those who grow it and is thus detached from the monetary cycle of a given economy – a decrease in the unequal distribution of land and for biomass to only be used if it does not compete with the food supply. In the section entitled “Promotion of Sustainable Technologies and Technology Transfer”, the focus shifts towards targets for energy efficiency, renewable energy, resource efficiency and sustainable food supply, as well as the abandonment of high-risk technologies such as nuclear power and genetic engineering. Photovoltaics is cited as a practical example: it can be used globally, independently of the grid, and incurs no fuel costs. The subsequent section centres on “Stopping the Depletion of Natural Resources”. Here, those who signed the document state that the destruction of forests and the loss of agricultural land is already having dramatic consequences. It will now be virtually impossible to “reconstruct” these resources. Under the next heading, the laureates demand that a budget be made available for a “Green Security Funding Program” amounting to half the sum already allocated to financing sustainable measures. Finally, at the end of the declaration, the 63 environmental laureates call for “UN Reforms in the Area of Environment/Sustainability”. According to the signatories, the United Nations should afford international environment protection and sustainable development the same priority as policy on health, nutrition and employment.

The European Environment Foundation
The European Environment Foundation was founded in autumn 2011. The aim of the foundation, which is registered under Swiss law, is to promote dialogue in all disciplines of environmental policy within European states, to provide it with impetus and to instigate practical, supportive exchange within Europe that builds trust, facilitates communication and stimulates research. The foundation’s twelve trustees are all renowned individuals from the international environment movement. Prof. Eicke R. Weber, director of the Fraunhofer Institute for Solar Energy Systems ISE, is the chairman of the Board of Trustees. The founders of the foundation are Bernd Dallmann, managing director of Freiburg Wirtschaft Touristik und Messe GmbH & Co.KG (FWTM), and Rolf Hiller, co-founder of FHE Windkraft GmbH and STP Windkraft GmbH. 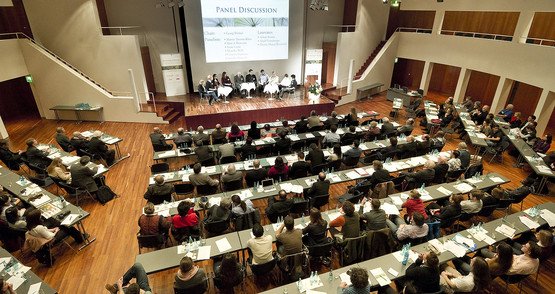