Berlin, Germany, 04 March 2013 – In the run-up to its 2nd International Convention of Environmental Laureates, at which winners of internationally renowned environmental prizes from all over the world will gather at the invitation of patron Klaus Töpfer from 14 to 17 March in Freiburg, the European Environment Foundation EEF is urging a departure from the search for the lowest common denominator on the subject of international environmental and climate protection at today’s Federal Press Conference
in Berlin.

Instead, the EEF is advocating worldwide coalitions of pioneers who are to demonstrate to the international community the economic benefits of the efficient and sustainable use of natural resources. The EEF is convinced that such a pragmatic two-speed model, in which states assume differing degrees of responsibility in accordance with their respective economic and technological capabilities, has a far greater chance of success than the struggle for emission limits or volumes. To this end, the EEF proposes to encourage discussion of the two positive objectives, energy efficiency in national economies and the proportion of renewable energy sources as key indicators. Furthermore, innovation goals should be defined for particularly energy-efficient products and technologies with special worldwide significance. Requirements should relate to energy efficiency, quality, price and sales quantities, and their implementation be fostered by financial incentives.

Ernst Ulrich von Weizsäcker, member of the foundation’s Board of Trustees, explains the intentions behind the EEF’s International Convention of Environmental Laureates: “The results of the major environmental and climate summits emerging from the political arena have been far from satisfactory”, the world-famous environmental expert points out. “With its convention, the European Environment Foundation EEF has in response created an additional platform to give environmental  and climate protection a voice and lend it more weight in politics and society.”

The EEF wants to use the convention to generate a global network of highly successful laureates from the most varied fields and to make their experience available to others. Perspectives beyond the limits of conventional growth are the key topic this year.

The focal point of the opening session on 14 March will be a public lecture by environmental laureate Ashok Khosla from India, Chairman of the Development Alternatives Group, on ways of creating sustainable jobs through sustainable policies. Development Alternatives has already generated more than three million ecologically sustainable jobs in rural India in the last 30 years. Dieter Salomon, Mayor of the City of Freiburg, and Bernd Dallmann, founder and Chairman of the EEF, will welcome
participants at the Historic Merchant’s Hall in the City of Freiburg. For interested members of the public, there will be two further events. Hans Joachim Schellnhuber, Director of the Potsdam Institute for Climate Impact Research, will give a lecture on the evening of 15 March, and on Saturday, 16 March, Klaus Töpfer, patron of the convention and Jorgen Randers, co-author of Limits to Growth and author of 2052, will discuss the most recent report to the Club of Rome.

The participants at the convention, which is due to take place in mid-March, will present a declaration in which they outline a two-speed model for global environmental and climate protection.

With its convention, the EEF also aims to strengthen the involvement of young people and communicate ideas, initiatives and visions. The programme on Saturday, 16 March will therefore include a series of Round Tables, during which young researchers, students and school pupils can meet the international environmental experts and exchange views on the current situation, development scenarios and ways of achieving possible solutions.

About the European Environment Foundation
The European Environment Foundation founded in 2011 intends to provide new impulses for environmental and climate policies. It has set the aim of promoting communication and professional exchanges between society, politics, research and business across the globe and across all disciplines. The founders and chairmen of the Foundation are Dr. Bernd Dallmann and Dipl.-Ing. Rolf Hiller. The Board of Trustees of the Foundation is composed of 13 well-known persons from the sectors of
environmental and climate protection. The Chairman of the Board of Trustees is Prof. Dr. Eicke R. Weber, director of the Fraunhofer Institute for Solar Energy Systems ISE. The Foundation headquarters are located in Basel, Switzerland.

About the 2nd International Convention of Environmental Laureates:
The EEF’s 2nd International Convention of Environmental Laureates from 14 to 17 March 2013 will bring together winners of prestigious international environmental prizes in Freiburg im Breisgau. More than 80 laureates from 44 countries have confirmed their attendance. The convention has as its motto “New Coalitions – To Address Limits to Growth”. Key themes are
sustainable jobs through sustainable policies, a two-speed model with individuals, regions and countries acting as environmental and climate protection pioneers and an update on the report to the Club of Rome on limits to growth. The convention initiated by the EEF is intended to be an international platform for the exchange of experiences and concrete proposals for solutions. 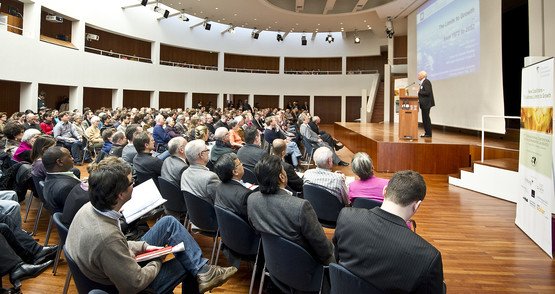