Freiburg will be the Mecca for international environmental laureates

Experts from around the world will be discussing perspectives and outline conditions for sustainable business beyond the limits of conventional growth.

Basel / Freiburg, 13 Dec 12.2012 – Freiburg will once again turn into the Mecca of environmental and climate experts from across the globe in March 2013. The European Environment Foundation, under the patronage of Klaus Töpfer, is inviting winners of prestigious international environmental prizes, and representatives from science and politics, to their second international convention in Freiburg. Following the successful launch event in 2012, the convention is to be further developed into becoming an internationally leading platform for exchanging experiences and transferring knowledge in the sector of environmental and climate protection.

"Climate summits have so far only had modest successes", said Eicke Weber, Chairman of the Board of Trustees of the European Environment Foundation EEF, explaining the intention of the convention he. "The climate crisis is not resolved in these annual meetings, as was the case in the recent climate summit in Doha. This is why we are looking for alternative ways to provide the important issue of protecting natural resources with a voice and strengthen it within politics and the society."

Participants at the convention in Freiburg will be winners of prestigious international environmental prizes. They include active environmentalists, publicists and civil rights activists, scientists, sponsors and business people. Above all, they are doers, with one thing in common: They have a vision and goals, and they have found ways of implementing them, usually with limited means and frequently in an hostile environment. Every one of them has made a significant contribution in their field towards environmental and climate protection.

The initiatives and active contributions of these laureates for environmental and climate protection are far more tangible to people than abstract research results or protocols or political declarations. These convictions are shared by the EEF founders and Board of Trustees. The ´International Convention of Environmental Laureates´ is therefore intended to provide the laureates with a platform. This platform is intended, on the one hand, for regular exchanges of experiences between each other. The laureates themselves become multipliers and creators of ideas and initiatives that can be successfully implemented in other areas around the world. On the other hand, the convention is perceived as a tool for the further dissemination of ideas, initiatives and visions to young people and the interested public. Another constituent element also includes meetings and discussions between laureates and upcoming researchers, students and pupils, as well as various public events.

The ´2nd International Convention of Environmental Laureates´ will be opened on the evening of the 14th March 2013 in the ´ Historic Store´ (“Historisches Kaufhaus”) in the City of Freiburg, Germany. A welcome address will be given by Dr. Dieter Salomon, Lord Major of the City of Freiburg, and Dr. Bernd Dallmann, co-founder and co-chairman of the EEF, followed by a lecture presented by Ashok Khosla, Chairman of the Development Alternatives Group. Hans Joachim Schellnhuber, Director of the Potsdam Institute for Climate Impact Research, and Janez Potocnik, European Commissioner for the Environment, will give a lecture in the Assembly Hall of the University of Freiburg in a public evening event at the convention on Friday, the 15th March 2013. On Saturday, the 16th March 2013, the main theme will be the meetings between laureates and young researchers, students and pupils. Speakers during the public matinee lecture on Saturday afternoon will be Klaus Töpfer, patron of the convention, and Jørgen Randers, co-author of "Limits to Growth" and author of "2052", the latest Report to the Club of Rome. The results of the convention will be presented at 3.00 pm in the concert hall.

About the European Environment Foundation

The European Environment Foundation founded in 2011 intends to provide new impulses for environmental and climate policies. It has set the aim of promoting communication and professional exchanges between society, politics, research and business across the globe and across all disciplines. The founders and chairmen of the Foundation are Dr. Bernd Dallmann and Dipl.-Ing. Rolf Hiller. The Board of Trustees of the Foundation is composed of 13 well-known persons from the sectors of environmental and climate protection. The Chairman of the Board of Trustees is Prof. Dr. Eicke R. Weber, director of the Fraunhofer Institute for Solar Energy Systems ISE. The Foundation headquarters are located in Basel, Switzerland, and it is subject to Swiss Law. 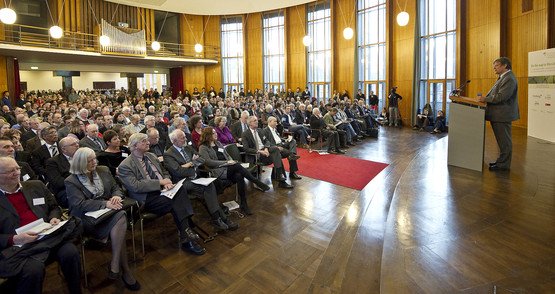