“Youth for the Environment”: Online Contest for school and youth projects – Public Voting until January 22nd

Seven school and youth projects in the fields of environmental and nature protection from Germany, Brazil, Vietnam and Ghana will participate in the competition “Youth for the Environment” of the online platform "EnviroNetwork.eu". In a public voting on the Facebook page of the European Environment Foundation the winner will be selected until January 22nd, 2017 (fb.com/EuropeanEnvironmentFoundation). The project with the most “Likes” will win. The main prize will be the free participation in the four-day International Environmental Convention in Freiburg from March 9 to 12, 2017 during which the project will be presented.

The competition was open to young people between 16 and 28 years of age. The participants added their environmental protection project to the “EnviroNetwork.eu” online platform which was initiated by the FWTM in cooperation with the European Environment Foundation. The platform is sponsored by the German Federal Environmental Foundation (DBU) and enables digital networking for NGOs, environmental laureates and activists, students, businesses as well as the media and press. They can get information on the website or even create profiles and projects and present them to the public.

The contestants at a glance:

Project: One-Child, One-Tree
Group: Centre for Environmental Research and Policy Analysis (CERPA), Accra, Ghana
CERPA is an environmental NGO in Ghana with the aim of promoting environmental protection and sustainability through research, education, participation and innovation. The target group of this project are primary school students who are given an understanding of the environment through awareness campaigns and tree planting activities. In order to operate on a large and extended scale, the organization cooperates with village communities and local organizations. The school selected for 2017: The Akim Manso A.M.E. Zion A and B Primary School in the Birim Central Municipal District of the Eastern Region of Ghana.

Project: Pictorius Wind Power
School: Pictorius Vocational College, Coesfeld, Germany
The aim of the project is to inspire young people to become involved with renewable energies, in this case wind energy. In fact, the students learn how they can shape their environment through technologies and design. The project combines technologies and art – an experimental kit was especially developed for this purpose. Schools can use these kits to test and compare the efficiency of different designs. In June 2016, the results of the students' work were presented in the land-art installation “Windkraftkunst im Kornfeld” (Wind power art in the cornfield).

Project: What is climate change and what do I have to do with it?
Group: Engajamundo, Sao Paulo, Brazil
The “Engajamundo” project aims to give young Brazilian people an understanding of the current climate change reality and to raise an awareness on their possibilities for participation and decision-making with regard to climate change issues. Workshops for young people are held in the 5 regions of Brazil. In addition to the theory, the participants are introduced to practical possibilities of action, for example vegan cooking.

Project: Full board for insects
School: Heimschule Lender, Sasbach, Germany
In the school year 2014/2015, the students of the Heimschule Lender occupied themselves with the topic “The Relevance of the Bee – Regional Impact and Global Position” within the framework of the media-pedagogical competition “Jugend recherchiert” of the Frankfurter Allgemeine Zeitung. In addition to a newspaper article and a book about honeybees, this resulted in the desire to do more for bees and to draw people's attention to them. The school's open day was perfect for this purpose. All children were able to build their own small insect hotels. But also insects need full board! For this reason, they prepared envelopes into which the children were able to fill a few perennial native flower seeds. About 100 children have benefited from our offer during this very successful event. Since the school's first open day, the event has been held every year.

Project: Green Pen
Group: Green Journalist Club, Ninhbinh, Vietnam
In this project, young students and communities in rural areas of Vietnam are to gain an awareness on the importance of environmental protection. During 7-day training courses, students from secondary schools learn about the environment and are provided an insight into basic journalism skills. In addition, they explore nature in national parks.

Project: Active prevention of water pollution through textile fibre filtration
Group: Hebelschule Schliengen, Germany
The end products of sewage treatment plants are released into rivers or spread out in the form of sludge for fertilization on fields. This sludge consists to a certain extent of plastic and cotton fibres. As soon as these fibres are on the fields and flowers, bees collect them and the fibres finally end up in the honey. Furthermore, if the fibres are released into the rivers, they can be taken up by fish that die consequently. The students of the Hebelschule Schliengen came to the hypothesis that the fibres are washed out of the clothing and released in the washing machine. These fibres can be filtered out only partially by the sewage treatment plants. The project's aim was to find out more about the degree to which the situation is a real issue, and if so, to find a technical solution to reduce or eliminate the problem.

For more information on the applicants and the individual projects, please click on the following link:
www.european-environment-foundation.eu/en-en/environetwork/online-contest/submitted-projects 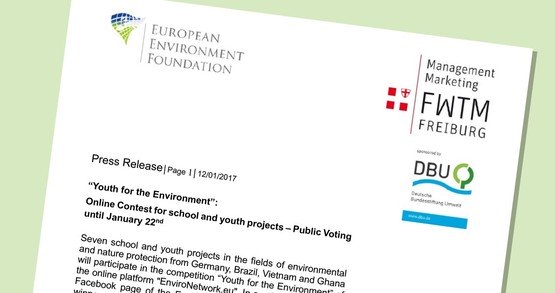