In Freiburg 10th/13th April 2014 over one hundred environmental award winners from around the world convene and with their new contacts and strategic alliances depart for home.

Freiburg, 14.04.2014 – From the 10th to the 13th April 2014 environ-mental and climate Laureates convened under the EEF – European Environmental Foundation for the third time. Over one hundred en-vironmentalists, publicists, scientists, civil rights activists, sponsors and business people from 41 countries attended this unique inter-disciplinary forum. The visions and goals of their work were pre-sented in discussion forums and subsequently they have made stra-tegic contacts to overcome barriers and help them in their field en-abling the progression and realisation of their aims.

"For my current initiative ‘Kurswechsel Landwirtschaft’ I got to know new agricultural partners" said Hans Herren current winner of the alternative Nobel Prize." This event provides an excellent forum to build networks and to forge new coalitions." the President of the Millennium Foundation campaigned for years for an alternative form of agriculture to reduce hunger in Africa. Nadezhda Kutepova who as a lawyer has defended victims of the nuclear industry in Russia for ten years, feels just strengthened: "It helps me when I get together with activists, who understand me. This is a great psychological sup-port, which gives me courage to progress in Russia." Regula Ochsner, the founder and Managing Director of the Swiss NGO ADES (Association pour le Développement de l’Energie Solaire) ex-presses the advantages as simply "The exchanges during these days are worth their weight in gold." Their aim is to produce an eco-friendly cooker in Madagascar and they have met like-minded peo-ple from India who can deliver the technology that is missing.

Other inspirational examples include Dipal Barua the Chairman of the Bright Green Energy Foundation in Bangladesh, who presented the vision to make Bangladesh one of the world's first solar Nations. As of today 2.8 million people in rural areas use solar power by 2020 there will be 75 million. "We ensure green energy in regions that are so far not even supplied by electricity and create many jobs" said the solar campaigner. For him it is inevitable that lights, televisions, cell phones and even the millions of diesel generators being used for water pumps in the rice fields, will all operate only with solar power. He received support from Winfried Hoffmann, a physicist researching and looking for solutions in photovoltaics since 1979 in "The longer I work in this sector the more I am convinced that the 100 percent solution for the entire world will come sooner rather than later." Emphasising that in the current energy discussions in Germany if a fair comparison is made; solar power is cheaper than nuclear and coal as opposed to writing off conventional power plants.

A large proportion of the participants are committed to a goal that encounters less scepticism in the public eye; the preservation of our biodiversity. The Croatian Goran Gugic advocates as much in his country over the preservation of the natural heritage as Clive Crouch in Australia or Birgit Braun in Namibia. In Freiburg they have found allies and support in each other for the future.

"Here was the exchange of global models of success - from Bangladesh to Germany and on to Peru – each mutually encouraged by successful environmental award winners and activists" Ernst Ulrich von Weizsäcker currently co-chairman of the Club of Rome and member of the board of trustees of the European Environmental Foundation, summarising the experiences of the participants of the Freiburger Convention as "I hope that this develops a new dimen-sion of a global scale climate and environmental protection."

We are very pleased," says Bernd Dallmann founder and execut-ive board member of the European Environmental Foundation. "We have now for the third time environmental campaigners from around the world meeting in Freiburg and created for them exactly the plat-form they need to network. I talked to many participants, and they have all confirmed how important personal exchanges are in getting to make contacts; that is what we offer here." That a good third of the attendees are already regulars at the events and are present each year shows how important the winners view the network.

This was quite different from the appeal of Monika Griefahn once head of Greenpeace Germany and Environment Minister in Lower Saxony, Germany. She introduced the so-called cradle-to-cradle concept and pleaded for products that generate no more waste. TV and Office chairs for example to be regenerative designs used in a permanent technical cycle repeatedly according to nature's model, which also only knows cycles.

Günter Pauli presented his vision of a "blue economy" with which he wants to create 100 million jobs over ten years with noisy eco-friendly products. And he appealed to all those present, to change our views of the world and to develop ideas to change to a different economy. "We need to create a new strategy of growth and prospe-rity, because our planet is destroyed with the past."

Quasi, a real world example by Raluca Radu: who presented the first "Fairphone" to the participants from all over the world. It is a mobile phone, whereby the extraction of the rare raw materials do not destroy the rainforests in the Congo, nor is the plight of workers in Asian producing countries increased. "We provide fair jobs" says Raluca Radu. This example is an appeal to the large manufacturers in the industry because it shows what is possible if one only wishes. And it appeals to all users to consider the social and ecological bag-gage when they buy smartphones, laptops or televisions.

For the first time this year Baden-Württemberg Minister of agricul-ture Alexander Bonde and Secretary Rita Schwarzelühr-Sutter from the Federal Environment Ministry spoke to the convention. Ad-ditionally EU climate Commissioner Connie Hedegaard appealed in a greeting to all to create new impulses so that the world commu-nity by 2015 forges an internationally viable agreement in Paris, ad-hering to the 2-degree target in the area of climate protection. "The participation of these figures shows that our environmental Conven-tion is taken seriously by government officials" Convention Director Bernd Dallmann concluded.

About the European Environment Foundation:
Organizer of the convention is the European Environment Founda-tion whose board of trustees is made up of 16 figures with substan-tial knowledge and experience of environmental matters, such as Professor Ernst Ulrich von Weizsäcker, Monika Griefahn, Mar-cello Palazzi, Professor Antonio Luque and Giovanna Melandri. The chair of the board of trustees is Eicke R. Weber, director of Europe's largest solar research institute, The Frauenhofer Institute for Solar Energy Systems. Founded in 2011, the European Environ-ment Foundation wants to set new impulses in environmental and climate politics. Its aim is to promote communication and global ex-change of expertise across and beyond society, politics, research and the economy.
Further information about the foundation as well as the program for the convention and a list of participants can be obtained at the fol-lowing address: www.european-environment-foundation.eu 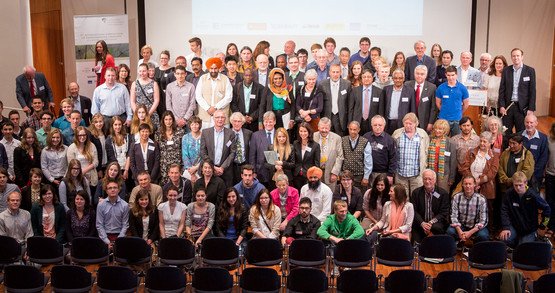