World’s top environmentalists call on foundations and philanthropists to use their financial power against global warming.

160 leading environmentalists from 44 countries today called on foundations and philanthropists to use endowments worth billions of dollars to turn the tide on global warming.

The group, all winners of major environmental awards, issued their call to action in an ‘Environmental Laureates’ Declaration on Climate Change’, published in the International New York Times, a week before world leaders arrive in New York for a UN Climate Summit.

“We, 160 winners of the world’s environmental prizes, call on foundations and philanthropists everywhere to deploy their endowments immediately in the effort to save civilization,” say the laureates. “The world’s philanthropic foundations, given the scale of their endowments, hold the power to trigger a survival reflex in society, so greatly helping those negotiating the climate treaty.”

The European Environment Foundation (EEF), which circulated the declaration to prize-winning environmentalists for signature, will now write to foundations individually asking them to use their financial power to create a tipping point in climate action:
1. By investing directly in clean energy companies and low-carbon projects;
2. By withdrawing investments from fossil fuel companies or campaigning as shareholders for them not to develop new reserves;
3. By making grants to support clean energy start-ups and stimulate the development of low-carbon markets.

Foundations have already begun to take action on climate change through the Divest-Invest coalition. It launched in January 2014, announcing that 17 organizations with assets of nearly $2 billion had committed to pull their investments out of fossil fuels and back clean energy instead.

Dr Ellen Dorsey, Executive Director of the Wallace Global Fund and a leader of the coalition, welcomed the declaration. She said: “The escalating climate crisis threatens the programmes of every philanthropic organization. Growing numbers of foundations are shifting their money from fossil fuels to clean energy so their investments help solve this crisis instead of contributing to it. We hope that our stand will encourage others to take the urgent action we now need to prevent runaway global warming.”

In a full page advertisement in the International New York Times the environmental laureates warn that the world is “heading for 4C to 6C of global warming, given current policies on the burning of coal, oil and gas”, and say they are “terrified that we will lose our ability to feed ourselves, run out of potable water, increase the scope for war, and cause the very fabric of civilization to crash.” Their comments are based on warnings from the UN’s Intergovernmental Panel on Climate Change.

In the declaration they argue that climate change on this scale will not only devalue or destroy all the good work done by the world’s foundations, it will also erode the worth of their huge endowments, leaving them with “stranded assets” in companies damaged by the consequences of global warming.

Dr Jeremy Leggett, the EEF Trustee who coordinated the declaration, said: “The world’s philanthropic foundations fund work which improves the lives of millions of people around the world, but if they want that work to last they can’t afford to ignore climate change. Investing in a clean energy future is the best way to safeguard their work and their finances.

“We hope this appeal will stimulate vital investment in a clean energy future, demonstrate support for an ambitious climate change treaty, and create space for a tipping point in climate action,” said Mr Leggett, who is a Hillary Laureate for Exceptional Leadership in Climate Change Solutions.

UN Secretary-General Ban Ki-Moon has invited world leaders from government, finance, business and civil society to the New York Climate Summit on 23rd September, 2014, and has challenged them to make bold commitments to reduce greenhouse gas emissions and build political momentum towards a global climate change treaty at the December 2015 Paris Climate Summit.

The environmental laureates warn that time to prevent damaging global warming is fast running out and “the Paris Climate Summit may be the last chance to agree a treaty capable of saving civilization”. However, they say that foundations and philanthropists have the financial resources to respond on a scale that would materially increase negotiators’ chances of success in Paris.

Statements from Key Signatories
Aimée Christensen (USA), Hillary Laureate, said: "The scientific imperative for climate action has never been stronger: we face grave risks from inaction, including risks to our investments, as captured by this year's Risky Business report. As governments work towards Paris to put in place policies to meet the climate challenge, we need foundation endowments to align their investments with their goals of doing good around the world, joining other leading investors and businesses to transform our economies to be more efficient, resilient, secure, and price stable - and to create high quality jobs and healthier communities."

Paul Gilding (Australia), winner of the Tomorrow Magazine Environmental Leadership Award, said: "Climate change has the capacity to overwhelm all efforts in other areas such as poverty and biodiversity. Anyone concerned about improving quality of life or protecting natural areas should know that unless they also act on climate, they are likely to waste their efforts. Here in Australia we already see dramatic climate change impacts and the process has just begun. The solutions, like renewable energy, are ready to fly and so Foundations have a great opportunity to accelerate the change.”

Prof Dr Ernst von Weizsäcker (Germany), winner of the German Environment Prize, said: "Acceleration of climate action by foundations at this crucial, make-or-break time would send a hugely useful signal to the world of investment."

Peggy Liu (China), Hillary Laureate and Time Magazine Hero of the Environment, said: “Accelerated funding by foundations could boost climate solutions that could work to address China's emissions at gigascale and gigapace. Endowment capital paired with Chinese resources could commercialize affordable sustainability solutions for the world, or help China build new cities with lighter environmental impact on the world's resources, or visualize an aspirational and sustainable China Dream lifestyle for the emerging 900 million city dwellers to lessen impact on consumption.”

Dr Harish Hande (India), winner of the Ramon Magsaysay Award, said: "In India, we see daily the power of sustainable energy to improve the quality of life of the poor while also reducing global warming. There is so much scope for an accelerated programme of investment and funding by foundations to move the dial further on these issues, leading by example. Together we could well trigger a tipping point in social-change for good, just in the nick of time!"

Jeunesse Park (South Africa), winner of the UNEP Sasakawa Prize, said: "Anthropogenic climate destabilization is hitting Africa right now, and the poorest suffer, despite Africa's vast resource wealth and ideal situation to innovate and implement renewable energy, eco-agriculture, more intelligent land use, and – instinctively - to lead a lower carbon path. The idea of a ‘big boost’ in investment and grant-making is not just timely but imperative."

Dr Jeremy Leggett (UK), Hillary Laureate, said: “Foundations responding to this appeal could help those of us in the green business world who are trying to divert 5% of corporate profits to the fight against global warming. They could insist that all for-profit beneficiaries of their investments and grants give 5% of their profits to climate action causes. This would create a significant and wholly new pool of capital-for-good in the world, given the scale of clean-energy revolution needed if we are to beat global warming.”

Statements from Supporting Foundations:
Tellus Mater Foundation, James Arbib, Founder and Trustee, said: "We applaud this critical initiative. Climate change is the greatest challenge facing humanity and the window to address it pre-emptively is closing fast. Allocation of capital is a critical lever in pursuing a solution. We are actively looking at ways to invest our endowment to support a transition to a low-carbon energy system within a long-term and sustainable financial system.

"One of the key barriers we need to overcome is the lack of sophisticated products and the associated financial infrastructure to allow us to invest in this way. We are keen to work with other foundations and long-term investors, and the financial community to help develop this emerging market."

Polden-Puckham Charitable Foundation, Bevis Gillett, Vice Chair, said: “The significance of the environmental laureates’ declaration cannot be overstated. At the Polden-Puckham Charitable Foundation we are quickly waking up to the need to align our mission, our investments, and our grants, so as to keep our environmental impact within 2C of global warming. As a foundation what other policy choices do we have? What choices do other foundations have, if we are to address the climate crisis before it is too late? Sympathetic foundations now need to take the message on board and act as exemplars for others to follow.”

Notes for Editors
The full text of the declaration is below. A list of signatories and the awards they have won, and background on the initiative is attached. For further information or to arrange interviews, please contact:

Environmental Laureates’ Declaration on Climate Change
“Aghast that the Earth is heading for 4 to 6 degrees Celsius of global warming, given current policies on the burning of coal, oil and gas.

“Terrified that we will lose our ability to feed ourselves, run out of potable water, increase the scope for war, and cause the very fabric of civilization to crash as a consequence of the climate change that global overheating will bring about.

“Devastated that our governments have not succeeded yet in slowing, much less stopping, the flow of greenhouse gases into our thin atmosphere, in the full knowledge of these risks, despite a quarter century of trying.

“Aware that the December 2015 Paris Climate Summit may be the last chance to agree a treaty capable of saving civilization.

“Believing that the world’s philanthropic foundations, given the scale of their endowments, hold the power to trigger a survival reflex in society, so greatly helping those negotiating the climate treaty.

“Recognizing that all the good works of philanthropy, in all their varied forms, will be devalued or even destroyed in a world en route to six degrees of global warming or more, and that endowments that could have saved the day will end up effectively as stranded assets.

“We, 160 winners of the world’s environmental prizes, call on foundations and philanthropists everywhere to deploy their endowments immediately in the effort to save civilization.” 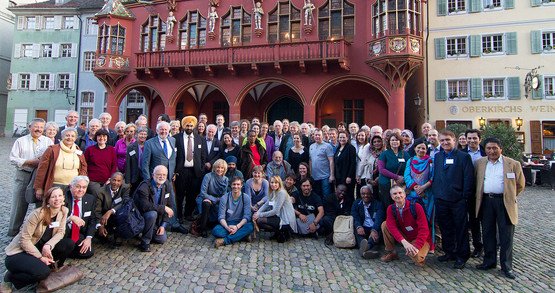