Sixth International Convention of Environmental Laureates: From 9–12 March 2017, Freiburg will be the venue for the world’s leading environmental experts

From 9–12 March, Freiburg is once again playing host to environmental and climate experts from around the world. Under the patronage of Klaus Töpfer, the European Environment Foundation (EEF) invited the winners of the most renowned international environmental awards to the sixth International Convention of Environmental Laureates in Freiburg.

Among the 100 environmental laureates from more than 40 nations are dedicated animal rights activists, civil rights activists, energy experts and scientists. The main theme of this year's event “Environmental Policy in a Politically Changing World” focuses on the persecution of environmental activists and award winners around the world. Special highlights are the public speeches by former President of Germany Horst Köhler as well as by Felix Finkbeiner, founder of the “Plant-for-the-Planet” initiative and Tristram Stuart, international award-winning author and expert on “food waste”.

The numerous environmental laureates returning to the event after having taken part in previous years as well as the many activists attending it for the first time are a testament to the increasing significance of the Convention of Environmental Laureates. The participants also include representatives of science, business and politics.

The European Environment Foundation is especially pleased to announce the participation of Bangladesh's Deputy Minister of Environment Abdullah Al Islam Jakob, who travelled to the convention on such short notice. Abdullah Al Islam Jakob has already participated in the United Nation’s General Conference, the UN RIO-20 Conference and the International Conference on Climate as a representative of the Government of Bangladesh. He is committed to social, cultural and development-related areas.

The participation of Marie-Luise Marjan shows the range of this year’s participants. Marie-Luise Marjan, who is mainly known for her role as “Helga Beimer” in the television series Lindenstraße, is participating for the first time in the environmental convention. Among other awards, the benefactress received the Great Cross of Merit and the B.A.U.M. Environmental Award for her social and sustainable commitment.

Germany's former President Horst Köhler is opening this year’s environmental convention with a speech on the sustainable use of resources and the necessary transformation of society and the economy – “Countering the narrative of decline: The great transformation as a global story of hope” – on 9 March at 6:00 pm at the Historisches Kaufhaus in Freiburg. In addition, Freiburg's Mayor Dieter Salomon and the chairman of the European Environment Foundation Eicke R. Weber will present speeches as well. The opening ceremony is open to the public (Tickets: 8 € / reduced: 5 €).

The second day of the Convention is dedicated to the transfer of knowledge and networking, as the environmental laureates are given the opportunity to present their projects and attend workshops. Under the guidance of Ernst Ulrich von Weizsäcker, Rainer Grießhammer, Sigrid Jannsen and Peter W. Heller, 22 environmental laureates will present their projects throughout the day. In addition, there will be workshops on the following topics:

▪ Social Media for small budgets
▪ GM-free, sustainable and local soybean production
▪ “Cradle to Cradle” concept towards a waste-free economy
▪ Strategies of the global divestment movement, which requires the deduction of investments in fossil fuel companies and, if possible, the reinvestment in sustainable investments.

Following the workshops, the participants of the convention will discuss and adopt a resolution – “Call to end repression”. This resolution is addressed to the governments around the globe to end the political persecution of environmental activists worldwide.

In the evening of 10 March, a further public event with Tristram Stuart and Felix Finkbeiner will take place at the Konzerthaus Freiburg: Tristam Stuart will present the ecological and social impacts of food waste in his speech “The cost of food waste”. Tristram Stuart is an international award-winning author, speaker and expert on “food waste”. In December 2009, he launched the food waste campaign “Feeding the 5000” at Trafalgar Square in London, in which 5,000 people were served free food, that would otherwise have been wasted, to raise awareness to reducing food waste. Meanwhile the event model has been replicated in several countries.

Another successful environmental project is the children’s and youth initiative “Plant-for-the-Planet”, which was founded in 2007 by the then nine-year-old student Felix Finkbeiner. In his speech “Planting one trillion trees – Why we need a trillion more trees”, he presents his foundation which follows the objective of raising awareness among children and adults towards global justice and climate change and actively fights the latter through tree planting campaigns. The two speeches are in English, will take place at the Konzerthaus Freiburg on Friday 10 March at 8:00pm and are open to the public (Tickets: 8 € / reduced: 5 €).

During the “Young Talents Day” on 11 March, students from 15 schools of the Freiburg Regional Council as well as students from the University of Freiburg’s Faculty of Environment and Natural Resources and the UWC Robert Bosch College have the opportunity to meet the international environmental laureates. Round table discussions enable the participants to talk about the latest environmental policy issues and topics.

At the Laureates Dinner in the Restaurant “Feinhaid” on the M10 Solar Campus in Freiburg, Moritz Schulz and Michael Sladek present the trailer of their film “Roadside Radiation” on the occasion of the sixth anniversary of Fukushima's nuclear disaster. In their documentary, the two film makers report about everyday life after the Chernobyl disaster. The film will soon be shown in cinemas in Germany.

Tickets are available at www.reservix.de and at all ticket agencies, such as the BZ-Kartenservice and Tourist-Information Freiburg, as well as at the box office.

Eicke R. Weber is the chairman of the Board of Trustees. Founders and directors of the foundation are Bernd Dallmann and Rolf Hiller. For more information, visit www.european-environment-foundation.eu. 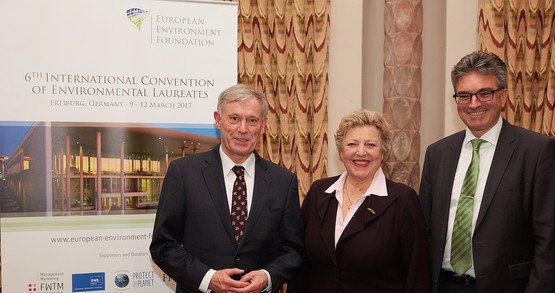