Project from Brazil wins the contest “Youth for the Environment”

Participation in the International Environmental Convention in Freiburg from March 9 to 12, 2017

The Brazilian project “Engajamundo” won the contest “Youth for the Environment” of the online platform “EnviroNetwork.eu”. With more than 5,000 likes in the online voting on the Facebook page of the European Environment Foundation, the “Engajamundo”  project defeated six other school and youth projects in the fields of environmental and nature protection from Germany, Vietnam and Ghana. The winners will be given the participation in the four-day International Environmental Convention in Freiburg from March 9 to 12, 2017, where they will present their project in the course of the “Young Talents Day” . Laureates of the world's most significant environmental awards participate in the Environmental Convention.

The initiative “Engajamundo” with the theme “What is climate change and what do I have to do with it?” aims to give young Brazilian people an understanding of the current climate change reality and to raise an awareness on their own sustainable actions. Various topics with regard to climate change will be introduced to the young people in workshops. As an example, the workshops that take place throughout Brazil deal with measures for climate protection as well as negotiations of the UNFCCC (United Nations Framework Convention on Climate Change). In addition to the theory, the young people are also introduced to practical options for action, such as reduced meat consumption or the use of public transport.

The competition was open to young people between 16 and 28 years of age. The participants added their environmental protection project to the “EnviroNetwork.eu” online platform which was initiated by the FWTM in cooperation with the European Environment Foundation. The platform is sponsored by the German Federal Environmental  Foundation (DBU) and enables digital networking for NGOs, environmental laureates and activists, students, businesses as well as for the media and press. They can get information on the website or even create profiles and projects and present them to the public. For more information on the applicants and the individual projects, please click on the following link: www.european-environment-foundation.eu/en-en/environetwork/online-contest/submitted-projects

An attractive prize awaits the winners:

EnviroNetwork.eu:
The project is sponsored until the end of 2017 by the Deutsche Bundessiftung Umwelt DBU (German Federal Environmental Foundation) and provides digital networking to environmental laureates, companies, NGOs, environmental activists, students and to the media and press. Those interested can get information on the website or create profiles and projects themselves. 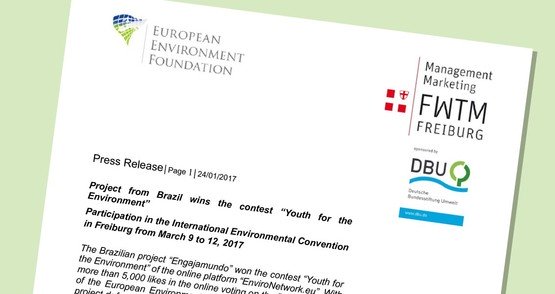